The “open educational ideas and innovations (OEI2)” initiative promoted open collaboration already when ideas for OER development are being formed so that trust into the educational materials gets higher and existing resources are more likely to be re-used. Now at the end of our project, we are excited to share good practices that demonstrate such an apporach. Below we will describe how the annual unconferences called “OERCamps” established a growing grassroot community for open educational resources (OER) in Germany.

BarCamps are participant-driven conferences during which attendees share and learn in an open informal environment. Unlike traditional conferences that pre-scheduled a programme, BarCamps rely on input 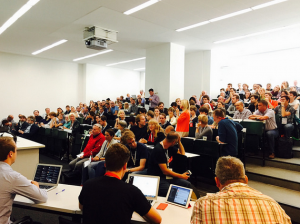 Session planning with all OERCamp attendees Photo by “jmm-Hamburg” under CC BY 2.0 Generic

from attendees to create the session programme on the spot and collaborate ad-hoc on emerging topics. The format was first established in the IT sector by web developers and software engineers. The OERCamp in Germany is based on this event format with a focus open educational resources (OER). Since 2012, several such camps have taken place in Bremen, Bielefeld and Berlin. On top of the ad-hoc sessions also some workshops are offered by the emerging OERcamp community members.

Main goals are to:

Publication on OER stakeholders and activities in Germany, Austria and Switzerland

The OERCamp has directly or indirectly resulted in the following outcomes (selection): 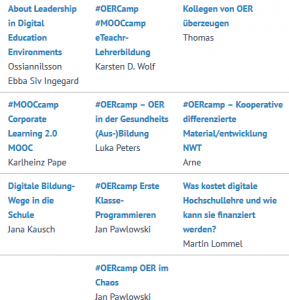 The camps have evolved as separate events out of unconferences focusing on educational technology, media education and innovation in education. Both are coordinated by the non-profit association “EduCamp e.V.” (website in German here). The organisation of the camps is financed through private sponsors and public funding that is acquired for every event. The list of media and other supporters (location, man power) has grown each year since the first OERCamp.

All session documentation is in the hands of participants with the organizers providing the technical infrastructure and core points to be recorded such as:

Examples of participant-led documentation in German is available for 2014 and 2015.

It is foreseen to continue the organisation of annual OERCamps.

OERCamps are attended by both a dedicated community of experts and new attendees. The events attracts individuals who are new to OER; approximately 50% of participants have never been to an OERCamp before (according to the organizers).