One of the main target groups of Open Educational Ideas are students and lecturers in higher education. Among those it is still uncommon to openly share classroom work with other students or colleagues they do not know. The “open educational ideas and innovations (OEI2)” initiative has worked towards a better uptake of OER and increased engagement among educators and learners. We promoted open collaboration already when ideas for OER development are being formed so that trust into the educational materials gets higher and existing resources become more likely to be re-used.

The following practice describes how a team of students and lecturers of an MBA class in Germany co-created OER with students/lecturers at other universities making use of custom-designed templates at the platform Idea Space.

By engaging students in business conflicts developed from real events cases immerse students in the challenges they are to face in the future. Challenges that require thoughtful analyses with limited or even insufficient information. That require effective responses within ambiguous circumstances or complex economic and political contexts. That, most of all, demand decisive action that must be articulated –and even defended – among other talented, ambitious individuals.

Baden-Württemberg Cooperative State University (Duale Hochschule Baden-Württemberg / DHBW) engaged an MBA class of international students who were familiar with open learning and MOOCs in co-creating case studies with other researchers at the institution and elsewhere.

The overall learning objective was to create an initial awareness for management failures and risk management. In detail, the aims were to

The work that was organized as a pilot during one semester in the frame of the “OEI2” project of which DHBW is a core partner. 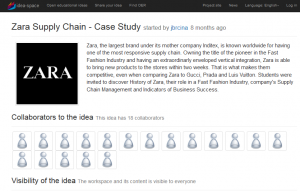 The collaboration led to new openly licensed resources in form of case studies for business and management in Higher Education that can be of use to more learners and educators at DHBW and other institutions. Those provide insights into the fast fashion industry (e.g. on the multinational H&M and Benetton) or project management of large scale construction works (e.g. the building Burj Khalifa in Dubai) for example.

The idea spaces containing the case studies in progress were shared with HEI teachers of the same programme at other universities who also rely on research papers to assess their students. Two more classes joined the collaboration and new inputs were given to the different idea spaces, in particular many open resources which could be used.

The aim and objectives to develop an efficient process of collaboration among students and professors in research and project work were achieved. The collaboration with the network of students and HEI teachers was especially helpful in providing new efficient ways, resource suggestions and exchange of thoughts how to approach the research topic.

The external HEI lecturers showed the willingness to further work together and, hence, the co-creation approach at DHBW supported networking among peer educators. 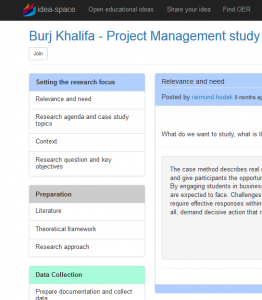 After the research topic had been defined and laid out by the course leader, students received a business case and were asked to place themselves in the role of the decision maker as they explored the situation and identified the problem they were faced with. The next step was to perform the necessary analysis – examining the causes and considering alternative courses of actions to come to a set of recommendations.

In order to facilitate the collaborative work and establish a more efficient way of collaboration on the research topics, the course leader at DHBW customized the template “research project” on the Idea Space platform and initiated the collaboration among the students and other researchers at the university. 20 participants were enrolled to the Idea Space platform who then authored and provided input to the five different case studies along the steps provided online.

The same approach is now used in further classes taught by the course leader at DHBW, i.e. the pilot turned into a lasting educational practice. Discussions are on-going whether and how the Idea Space can be used for class work organized by other lecturers at the institution.

After the initial successful usage of the platform, students confirmed the effectiveness and high level of knowledge distribution among the collaborators. Furthermore, students in other universities realized, that their knowledge grows faster, when they openly invite existing data and resources.

The key challenge was to find collaborators who share similar objectives and requirements. Regarding the collaboration with students at other universities, it seemed to be important to initiate a basis and structure with pioneers acting as lead users.

The use in class at DHBW led to several improvements of the Idea Space platform to ease future collaboration and idea sharing on OER and open education.