The “open educational ideas and innovations (OEI2)” initiative has worked towards a better uptake of OER and increased engagement among educators and learners. We promoted open collaboration already when ideas for OER development are being formed and AFTER their educational use so that trust into the resources is increased and existing resources become more likely to be re-used.

In a number of blog posts we share successful practices presenting initiatives that shared initial plans and ideas openly and reached out to (new) collaborators at an early stage (see also the previous post on a collaboratively authored open text book for biology). In this article, we share how a group of individuals with diverse backgrounds in different locations used the Idea Space to collaboratively develop a course on an up-to-date topic for school learning: Programming in first grade.

The initiative developed a course on programming for first class kids in primary school with a focus on the combination of physical and computer activities. A core aim was to use existing resources to keep the development effort low and to map learning objectives to existing (and new) curricula. The learning objectives of the course were:

The initial idea sharing has led to a collaboration as well as to new ideas, impulses and innovations. The result of the collaboration is published as an OER as well.

A main asset for the course development was the new curriculum in Switzerland which introduces media and information literacy from Kindergarten to K9. This was taken as an orientation for the course and can be transferred to countries which have not yet progressed that far.

Furthermore, a computer class in primary school and the public contributed

We selected this initiative because in contrast to OER sharing at a late/complete development process, a full lifecycle of open educational practice:

The initiator used a combination of channels to engage collaborators with similar objectives and requirements at an early stage: A barcamp, social media and the Idea Space platform.

It resulted in a full course (OER) including lesson plans and learning scenarios for about 30 hours including comments for teachers. The course makes use of of open educational resources, such as work sheets, and open source products. The result are fully accessible and editable in the idea space and google sheets.
The collaboration led to new ideas and concepts for the course and was especially effective in when providing initial feedback/recommendations to the idea, creating new scenarios and suggesting educational resources. The shared course development decreased the development effort significantly by about 2 months, in particular identifying existing OER and other materials, and collaboratively. Most individuals involved have agreed to continue to work together and extend the collaboration.

The course has been initially validated with teachers and the materials will be improved after the courses were held. 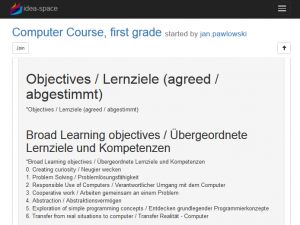 The initiative was launched at an unconference for educators and innovators in education (EduCamp) in Germany. The initial idea developed in this open context through a brainstorming session. About 10 participants participated and provided input regarding the idea. Those were enrolled in the idea space and results were documented there collaboratively. The collaboration was made easier through a pre-set template for collaborative course development which was enriched with information by the idea initiator for new collaborators. Especially the idea process was supported and facilitated in the platform created by the OEI2 project and the outcomes are accessible here (contributions are still welcome).

After the initial brainstorming phase, a loosely coupled project team was established. In this phase, three core collaborators (from Germany and Switzerland) agreed to develop the course together. This team establishment with lead users was important as a basis for the development.

The idea was then shared in relevant communities on Facebook and Twitter by making use of specific hashtags. A few requests came and new inputs were given to the idea space, in particular useful resources. New collaborators with different degrees of involvement were attracted.

For the core course development further online software was used, i.e. google docs and graphical tools. The resources will be posted next to a public repository, feedback is then collected again through the idea space.

The collaborators will continue to work together. In 2016 the team plans further improvement and exchange of experience after the courses have been held.

Furthermore, the collaborators have agreed to develop a further course and a project which will extend the scope to other countries in the European Union. The resources will also be used for teacher education in the future.

Thus, the networking effort has been very successful as a strong team was established. Also, loose connections to further collaborators have been developed which can be utilized in the future

The course development was driven by three lead collaborators. However, in between others have provided feedback and (OER) suggestions.

A key challenge to the initiative was the selection and combination of tools for authoring/adapting outside the idea space. It was helpful that all participants had rather advanced technical skills, so results could be transferred between tools.