The “open educational ideas and innovations (OEI2)” initiative has worked towards a better uptake of OER and increased engagement among educators and learners. We promoted open collaboration already when ideas for OER development are being formed so that trust into the educational materials gets higher and existing resources become more likely to be re-used.

Now, our team would like to share successful practices of OER creation, presenting initiatives that shared initial plans and ideas openly and reached out to (new) collaborators also at an early stage. Some of those practices made use of our custom-designed platform Idea Space whereas others organized their work through other online tools. We’ll start with “Schulbuch-O-Mat” from Germany:

The initiative “Schulbuch-O-Mat” (SBOM) set out to transparently provide free-of-cost and up-to-date teaching materials. More specifically SBOM aimed to create an openly licensed textbook for biology aligned to the curriculum of grade 7 and 8 in the federal state of Berlin, Germany.

It received high attention from the blogosphere and media. The initiative was launched in 2012 and financed through a crowd-funding campaign at startnext.de gathering 10.000€ in donations. The first version of the textbook was published in 2013.

SBOM initiators shared the intention to create an OER textbook early via social networking in order to promote the crowd funding project and raise awareness on openly licensed textbooks. Twitter, Facebook and Google+ were used regularly to call for voluntary authors, present updates on the state of the book, revisions, new contributors and future plans. Community members suggested revisions or up-to-date topics for the book. The initiatives reached more than 760 followers on Facebook and 480 on Twitter. 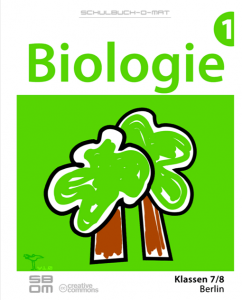 oung learners were involved in the authoring of the textbook. It can be downloaded in two formats (ePub, pdf) or accessed in html licensed under CreativeCommons BY-SA. It is accessible in improved version 1.3 at http://schulbuch-o-mat.de/biobuch/ . The book contains numerous figures and media files as well as class activities. Furthermore, a teacher in Cologne produced an Ibook version with his pupils.

The Austrian Ministry of Education BMUKK contracted an evaluation of the initiative (costs, savings compared to non-openly licensed textbook) and the quality of the textbook also investigating the transferability to Austria.

Supported by federal funding, Schulbuch-O-MAT promoted and held “Textbook hacking days” in 2013. Pupils collaboratively worked on a glossary of technical terms described in their own words. The results became part of the textbook under a specific section “from pupils for pupils”.

The initiative served as pilot project. There are on-going efforts to work towards more openly licensed textbooks:

It is noteworthy that the initiative succeeded to collect a respectable amount of donations and build a large community.

Schulbuch-O-Mat, however, could not find as many voluntary authors among teaching professionals as was hoped for. The challenge was solved by translating suitable OER from a US platform (CK12Foundation).